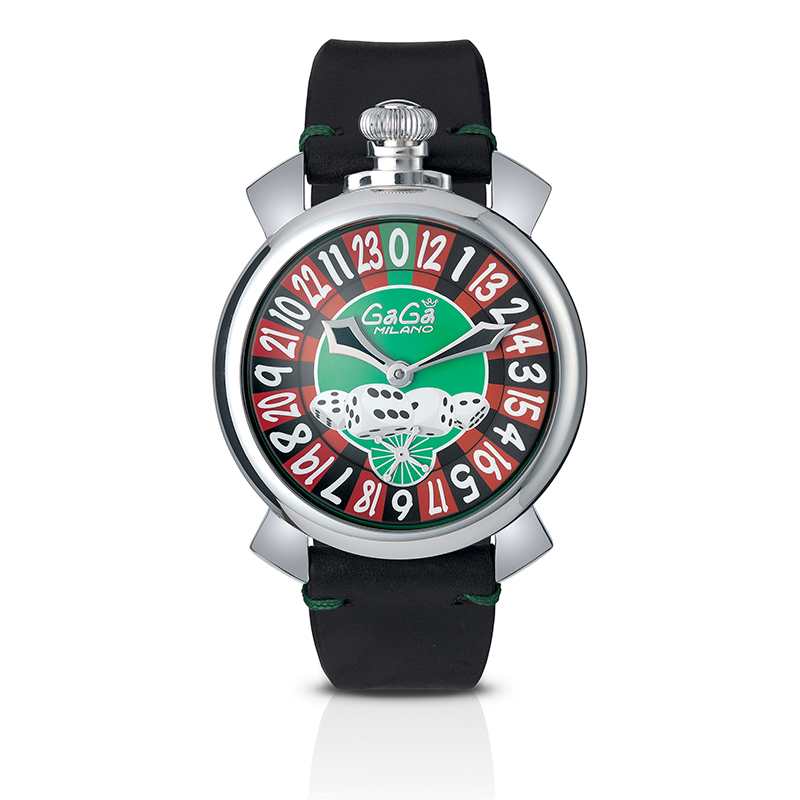 Available in three different versions, in limited edition – 300 pieces for each different model – it is inspired by the world of cards and dice.
The case, in steel in the first version, has undergone a shiny black PVD treatment in the second one; instead, it boasts a rose gold plate in the third one.

All faces, protected by a rounded mineral glass with sapphire-treatment, faithfully reproduce the roulette wheel, with peculiar numbers alternated in black (from 1.00 to 11.00 A.M.) and red (from 12.00 to 11.00 P.M.). Midnight is instead marked by a green 0, typical of the American roulette wheel. The tiny seconds, marked by hands that form an orthodox cross, resemble the French roulette.
These already unusual faces, are enriched by a 3D effect, given by two discs on two different levels, that portray even more realistically the wheel movement. One disc is for the numbering, and the other for the central section; both are green in all models, distinguished by the various cards symbols. Indeed, the steel version boasts dice that seem to have just been thrown on the green table; the PVD version portrays a winning four of a kind. Laslty, the gold-plated version carries the famous sentence pronounced by the croupier: “Les jeux sont fait”.

The barb-buckled leather strap is black with green stitching in the steel version. It is instead black with red seams in the PVD model, and red in the gold plated one.
All the Las Vegas models are accompanied by a luxurious lacquered wooden box containing, in addition to the watch, a small roulette wheel and some GaGà Milano-signed fiches.